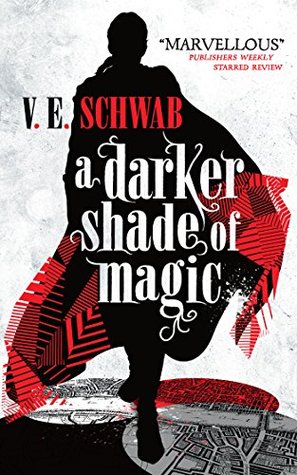 V.E. Schwab’s A Darker Shade of Magic, is a gripping read full of magic and mystery.

There are four distinct worlds, some full of magic, some almost devoid of it – and the only thing these worlds have in common is London. Once upon a time, travel between the four worlds was possible and frequent. These days, only the Antari – a rare people born with magic in their blood – can travel between the worlds and serve as liaisons and messengers for the rulers of the four Londons.

The world-building in this novel is extraordinary. At first glance the idea seems simple, four versions of the city of London stacked on top of each other. But each comes with its own culture, customs, names for landmarks and language, which makes the set up really quite complex.

Black London was the most powerful of all, brimming with magic until it turned destructive and its portals were closed off. White London has barely any resources left, including magic, making its sibling rulers brutal and power-hungry in a cold world. Grey London is mundane and its magic is scarce. It is also the most recognisable London for its resemblance of the real London in our world. And then there is Red London, a warm place in which magic is still abundant and which is home to an Antari named Kell, who moves between the worlds in his official capacity as royal messenger – as well as for his side-business as a smuggler of other-worldly trinkets.

Until he unknowingly takes a token across the worlds that contains a magic not seen in centuries and which could destroy everything he has ever known. His troubles really start, however, when the street-smart Grey London thief Delilah Bard decides to pick the wrong pocket.

Lila is a delightful character. She’s savvy and fierce, stubborn, adventurous, longing for freedom, and doesn’t mind giving the men-folk hell. So tagging along with a traveller like Kell is her ticket to the world. Lila’s perspective proves ideal for the reader, as Lila is just as wide-eyed and experiencing new worlds that are just as unknown to her as they are to the audience. The characters of Kell and Lila are incredibly layered and polar opposites of each other. Combined with the amazing magical worlds they inhabit, they make for a very compelling and intriguing story.

A Darker Shade of Magic is a story that draws you in immediately and keeps you under its spell.

“I’d rather die on an adventure than live standing still.” – Delilah Bard

One thought on “Review: A Darker Shade of Magic by V.E. Schwab”