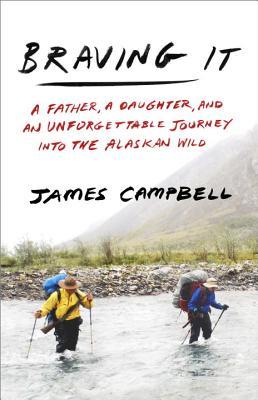 James Campbell’s father-daughter adventure Braving It is perfect for everybody looking to escape a city and trade it for the open wild.

James and his 15-year-old daughter Aidan Campbell’s story starts one summer with James’ cousin Heimo asking them to help build a cabin in the interior of the Alaskan Arctic National Wildlife Refuge. Aidan embraces the wild North. Together with her relatives, she hauls logs and builds a cabin, yes, but she also becomes more confident and at home so far away from civilisation.

This book is marvellous at invoking wanderlust and a sense of adventure. Together with Heimo’s Yupik Eskimo wife, Aidan learns how to track, trap and hunt, and meets caribou, moose. She even returns North with her father in the winter after their initial trip, to help her relatives work the traplines and learn more about surviving in Alaska’s Wild. Together, they encounter everything such a remote place has to offer. Freezing-cold rivers, wolves, snow, grizzlies and remoteness.

Their third and final Alaskan adventure sees the father-daughter team head back North in the autumn for a rite-of-passage for the both of them. According to Eskimo tradition, some women may go through the same rites as young men if they are deemed worthy. And after Aidan had previously demonstrated how at home she is in the woods up there, they decide to undertake an ambitious trip together. Armed only with what they can carry on their backs, the two set out to cross Alaska’s Brooks Range on foot until they reach the Hulahula river, before they assemble a canoe to take them all the way to the Arctic Ocean. Along the way, father and daughter have time to bond, and have an adventure like no other.

Braving It is a striking story about a father, a daughter, and the beautiful power of the Alaskan wilderness.

Braving It by James Campbell was provided to me as an
Advance Review Copy in eBook format by
Penguin Random House’s FirstToRead.