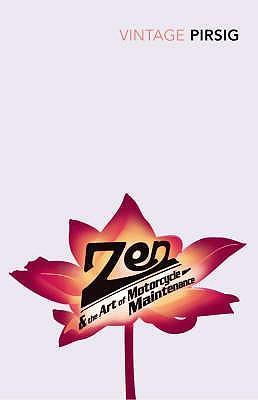 Robert M. Pirsig’s Zen & the Art of Motorcycle Maintenance embodies that 70’s spirit of road trips and the search for enlightenment.

The story follows the narrator and his son on a motorcycle trip across the North-Western USA. It’s a very personal and moving account, which is not only testament to their father and son bond, but also feels incredibly raw and real.

Along the way, the father and son duo have many philosophical discussions which they call Chautauquas, ranging from ethical emotivism to the philosophy of science. Unfortunately, the son, Chris, does not often get a word in edgeways. His father, or Phaedrus as he refers to his past self, has a lot to say. And while his teachings are solid, they are a mere introduction to philosophy and touch on the great philosophers who should be explored more after reading the book.

Despite the name, there is not as much Zen Buddhism, or motorcycle maintenance come to think of it, as one would expect. That being said, the explanation of the scientific method and how we as a society and as individuals go about discovering the truth, and the analogy of working on a motorcycle is beautifully written.

Road trips have this habit of serving as time for contemplation and finding oneself. The open road can do that to you. And discussing philosophical aspects and teachings with a fellow traveller is a valid past-time. Towards the end of the book, Zen & the Art of Motorcycle Maintenance really tips over into preaching, though. It’s no longer a discussion or an anecdote seen for its philosophical value. And that’s when the reading turns from being fun into being tedious. The search for enlightenment has turned into a lesson.

As a road trip story between father and son, during which the father wants to share some life advice, this would be great! But the author apparently could not resist temptation to turn absolutely everything into a philosophy lesson, which takes away from the story at the heart of this novel.

One thought on “Zen & the Art of Motorcycle Maintenance by Robert M. Pirsig #AtoZ”