If we were having coffee today, we’d sit inside sipping a hot brew. Even though temperatures reached 20°C here this week, today it’s back down to 8°C. How have you been this week?

If we were having coffee, we’d be talking about the Bard himself, William Shakespeare. Today is the 400th anniversary of his death, and there are Shakespeare celebrations everywhere. In fact, tonight, I’ll be seeing the star-studded live screening of Shakespeare Live! at the RSC from Stratford-upon-Avon.

I’ve been to Stratford twice before. My grammar school actually had an exchange programme with the Stratford-upon-Avon Grammar School for Girls and in 2001 I had the chance to participate. It served as my introduction to Shakespeare and his works, though back then, all we did was read his works. I confess, I may have gotten into Shakespeare earlier if we’d seen some of his plays. I went back in 2010, to revisit Shakespeare’s birthplace, New Place and take a short trip out to Shottery to Anne Hathaway’s Cottage.

The excavation site of New Place, the remains of Shakespeares residence, in Stratford-upon-Avon in 2010. ©Literati Girl 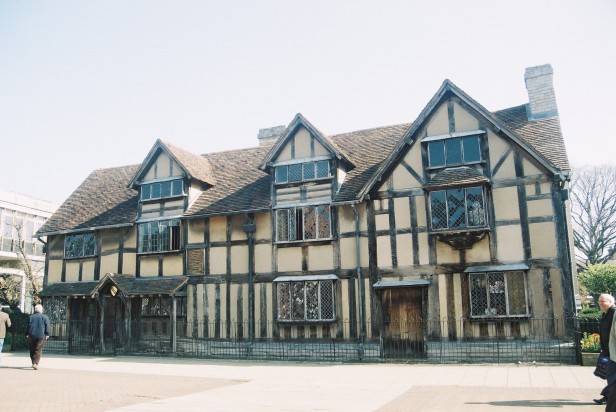 I think I really started to fully grasp Shakespeare when I saw the production of Richard III at Trafalgar Studios in London, starring Martin Freeman in 2014. If my first introduction to Shakespeare had been that play, I’d have been a convert immediately. It was updated, set in the 70s, performed in an intimate theatre, incredibly well-performed and so full of energy you didn’t feel the time pass at all. Since then I’ve made it a point to see more Shakespeare plays, like Hamlet at the Barbican last year, screenings of Richard II, As You Like It, Much Ado About Nothing, Hamlet and Coriolanus.

Do you have a favourite Shakespeare play? I can’t decide. I’d probably say A Midsummer Night’s Dream, but I have also found that in terms of theatre, I do like Shakespeare the better the gorier it is.

If we were having coffee today, I’d tell you I’m still catching up on the A to Z Challenge posts and hoping to be all caught up by tomorrow. So far I’ve reviewed: A Study in Scarlet, Bonjour Tristesse, Cross Bones, Down Under, Everything is Illuminated, Fahrenheit 451, Gulliver’s Travels, Holy Cow, Into the River, Jonathan Strange & Mr. Norrell, Kim, Lucky Man, Mr Penumbra’s 24-Hour Bookstore, Neverwhere, On the Road, Pride and Prejudice and Zombies as well as Quite Ugly One Morning.

I’m afraid this is where I have to leave you today. I still need to drive to Düsseldorf to get to the cinema in time for the screening.

Thank you for having coffee with me today. Same time, next week?

4 thoughts on “#WeekendCoffeeShare: If We Were Having Coffee… On April 23”