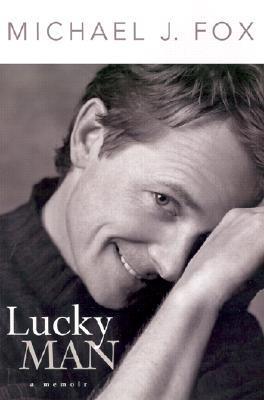 Many casual cinema-goers will know Michael J. Fox as an 80’s and 90’s star of the big and small screen, having headlined shows like Family Ties and movies like Back to the Future.

By now, it is probably also public knowledge that Michael J. Fox suffers from Parkinson’s Disease. His 2002 memoir Lucky Man offers a very personal account of his battles; not only with his debilitating disease, but also with his ego and alcohol addiction.

It casts the eternally young.looking actor into a whole new light. This is him, explaining his rise to fame from his Canadian roots to Hollywood, a name change – his real name is Michael Andrew Fox – and how early successes went to his head. He is brutally honest when he describes how he gradually became an alcoholic, and how the funny man on screen was struggling and in pain behind the scenes.

What becomes very clear, very early on is the stabilising influence his wife Tracy – whom he met on the set of Family Ties – had and continues to have on his life.

But possibly most shocking of all is that he was diagnosed with Early-Onset Parkinson’s Disease in his late 20’s, around the time the third instalment of Back to the Future came out. Parkinson’s is a shocking diagnosis at any point in life, but for a 29-year-old, it was devastating. He actually was so dependent on alcohol to function that he put the early symptoms and tremors down to delirium tremens. For a long time he suspected the hanging scene in the movie to have triggered his symptoms.

Michael J. Fox kept his diagnosis hidden from the public and the people he worked with for seven years, before he made the shock announcement. This gave him the time he needed to come to terms with his new reality, and get through several rounds of self-pity, before the media’s attention was on every small gesture he made.  Lucky Man is his honest account of how he came to terms with his diagnosis. He has had brain surgery while conscious, and succeeded in quitting alcohol cold turkey when he finally found a reason that made him want to stop: his new family.

Throughout the book, it becomes very clear that he is a family man, who keeps fighting his disease for his wife and his four children who lovingly call him “Shaky Dad.” He has raised awareness for Parkinson’s, started the Michael J. Fox Foundation and given a voice to many sufferers who had been ignored until he with his celebrity status took a stand and started looking for a cure.

At first, you’d think this book is just another memoir by a Hollywood actor who has had experiences with overnight fame and substance abuse. But this book is so much more personal than that. Every chapter includes a picture from the period he is writing about and later on, he even demonstrates the effects Parkinson’s has had on his life by showing his handwriting on and off his meds side by side. And yet, despite all his hardships, Michael J. Fox is calling himself a Lucky Man, because his family accepts him the way he is.

“The ten years since my diagnosis have been the best ten years of my life and I consider myself a lucky man.”

Lucky Man: A Memoir is a compelling and very moving read about what he has been through, what challenges he will have to face in the future, and how he continues to carry himself, spreading awareness of Parkinson’s Disease and looking for a cure. You definitely come away with new-found awe and respect for Michael J. Fox, who ceases to be simply seen as funny actor, and becomes a very brave man indeed.